Where Will VeChain, Solana, SafeMoon, THETA, Cardano Price Go in June? What Crypto Investors Should Expect

Bitcoin and the majority of Altcoins are climbing higher, marking the second consecutive day of trading in green. After May’s uninspiring price performance, Bitcoin remains stuck in a range below $40,000, while most Altcoins are yet to return to recently established highs before the crash.

With inflation worrying traditional markets and summer months traditionally good for bulls, there may yet be cause for optimism. Historically, June remains a fairly bullish month for Bitcoin, posting positive returns in five Junes out of eight since 2013.

In June, market focus may tilt towards Decentralized finance tokens. It should be recalled that the DeFi season for the previous year 2020 which saw most of these assets rallying immensely kickstarted in June.

VeChain (VET) is also set to play a significant role in China’s Plastic Pollution Control. A Twitter post caption indicated ‘VeChain featured blockchain and carbon naturality and the ten billion market under the order of plastic limitation.’ Wallet Investor predicts that the VeChain price could go up to $0.19 in June and up to $1 by 2025. Coinmarketcap’s prediction puts VeChain price at $0.1535 at the end of June which represents a 25.9% increase.

SafeMoon (SAFEMOON)
SafeMoon is an auto-generating liquidity protocol. SafeMoon witnessed a meteoric rise to reach all-time highs of $0.00001399 on Apr. 20. Though down by nearly 70% from its peaks, SafeMoon investors are optimistic that their much-loved token will recoup some of its losses in June as seen in a prediction report from Coinmarketcap. 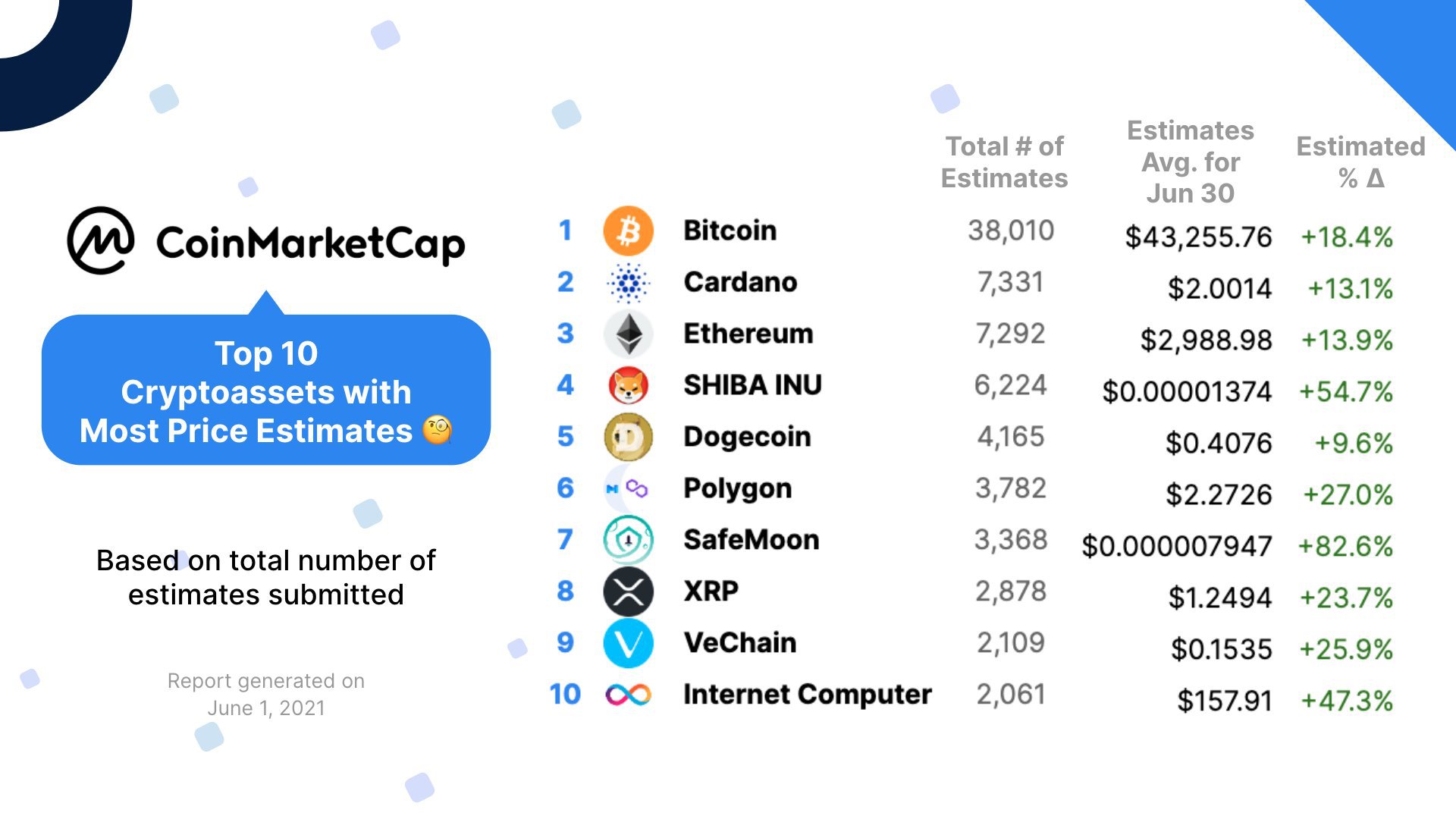 Crypto Price Predictions at the End of June, Courtesy: @coinmarketcap

Solana (SOL)
The Solana protocol is designed to facilitate decentralized applications (DApps) that scale. The hunt for cheaper Ethereum alternatives is being cited as a potential reason for the recent growth in Solana’s network activity.

On June 2nd, Solana announced the latest addition to its ecosystem, Metaplex Protocol, which represents a radically new approach to NFTs and NFT storefronts. Price forecasts for Solana begin from as low as $57 and as high as $206 by the end of the year. Presently, Solana trades rangebound at $39.46. Further bullish moves in June could target the $50 range.

Theta (THETA)
Theta, a blockchain-powered network purpose-built for video streaming and the biggest NFT token by market capitalization announced its upcoming mainnet launch scheduled for June 30. Theta had rallied in March following the news of the mainnet launch earlier scheduled for April 21st. The subsequent drop in its price came off after the network announced postponing the launch till June. A Twitter user voiced out optimism on the event:

”We are 30 days out from Mainnet 3.0 with a higher market cap, more tokens staked, more awareness, and much more money in crypto. I still think theta and tfuel have a minimum 500% in them before Mainnet”

Cardano (ADA)
The month of June may be quite eventful for Cardano as the gradual deployment of Alonzo’s Testnet is scheduled to occur in June. Early adopters will have the opportunity to test the first alpha Testnet, Alonzo Blue.

On June 3rd, Cardano’s parent company, IOHK announced the release of the Daedalus 4.1.0 mainnet. A day earlier, Cardano had announced its partnership with Nervos Network to build the first cross-chain bridge between Nervos and Cardano. The bridge will let users interchangeably transact with Nervos and Cardano’s native currencies (CKB and ADA), Cardano’s average price forecast by June 30 is $2. At the time of writing, ADA traded at $1.84, up 5% in the last 24 hours.

How Does Tether (USDT) Work and Why Is It So Controversial?